The world’s largest phosphate company, Mosaic Co., lost its bid Wednesday night to open a new mine on 18,000 acres of land near one of the state’s most pristine creeks.

After hearing impassioned testimony from hundreds of people over the course of two days, the DeSoto County Commission voted 4-1 Wednesday to reject Mosaic’s request to change the zoning on its property from agricultural to mining.

FULL ARTICLE IN TAMPA BAY TIMES AT THIS LINK:

Link to the Mosaic letter to the FDEP re a Variance Renewal Request for the Fort Green Mine Reclamation timing for an additional 10 years.

Florida Statute 378.209 is referenced in the Renewal Request

This press release from the Center for Biological Diversity discusses the recent appeal of our challenge to the Army Corp and the AEIS (Area Wide Environmental Impact Study) regarding the South Pasteur Extension Mine in Hardee County.

BOISE, Idaho (AP) — An agribusiness company that turned phosphate into fertilizer must pay $1.5 million in permit fees annually to eastern Idaho tribes to store millions of tons of toxic waste on tribal lands, a federal court has ruled.

END_OF_DOCUMENT_TOKEN_TO_BE_REPLACED

Would mining activities preclude future normal uses of mined out lands? This is question #6 from the Manatee County staff report, Standards for Master Mining Approval, page 13.

The answer is much more than staff reports. Not only building, but agriculture on reclaimed land would be extremely limited. Is the burden of proof not on the applicant? The market has not demonstrated that agriculture is a viable use of reclaimed mine land.

Mosaic may have their small, intensely managed experiments with ag after mining, however, vast areas of western Polk County demonstrate no agriculture to speak of on reclaimed land. The only exception is a rare siting of a few cows on grazing land.

Go to Hardee County. In 2008, a “Mosaic Agreement” granted the county economic gurus 42 million dollars over a ten year period as compensation for the 11,000 acre South Fort Meade Extension mine. The county will tell you is for economic mitigation in the post-mining economy. This money hopes to start up industry, but the results have been questionable at best. Is this not an admission even by the industry itself that after mining and reclamation, lands will not support the former economy of agriculture.

One time, temporary use; permanent loss. Phosphate strip mining is only profitable for Mosaic. Commissioners, think ahead one hundred years. Vote for Manatee County. Vote no on phosphate mining. 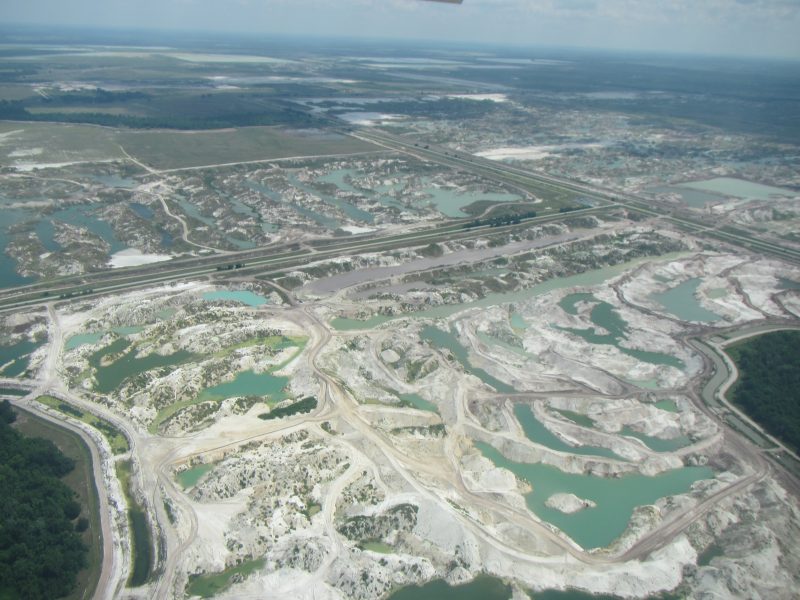 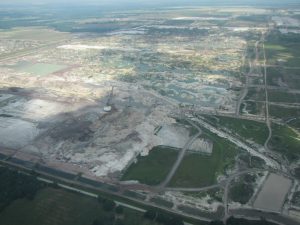 POLK COUNTY, Fla. (WFLA) – Some residents who live near the massive sinkhole at Mosaic’s New Wales Plant are worried about their well water.

Recent test results show they should be concerned because of high levels of radioactive material. What is not clear is whether the Mosaic sinkhole, which dropped 215 million gallons of radioactive water into the Florida aquifer, has anything to do with it.

Mosaic – and some experts – say it’s possible the radioactivity was already present in some of these wells. They said it could have been caused by by “natural geologic processes.” Testing so far, according to the Florida Department of Environmental Protection, show the contaminated water has been captured exactly the way it should be.

A DEP spokeswoman sent 8 On Your Side an email that said test results do not show that contaminants from the New Wales plant are showing up in the well water. There are certain characteristics from the New Wales water that are not showing up in the well water, leading the state to conclude the harmful materials in the water are unrelated to the sinkhole. The state official wrote:

“The ongoing monitoring onsite at the New Wales facility continues to show no movement of process water away from the sinkhole location. Process water is only being detected in the recovery well samples to date, which indicates that the recovery well is working as expected and capturing process water. In this geographic region of Florida, levels of gross alpha that are above the drinking water standard are often associated with natural geologic processes. In other cases, they may be related to the construction of the water well itself. ”

But resident Jennifer Psait isn’t sure she’s buying that. She points to a delay in Mosaic notifying residents about the problems.

One of two wells on Bob Glaze’s property has so much radium in the brown water that he shut it off – out of fear. Psait is Glaze’s next-door tenant. She shares his two wells. Psait is worried about her three children who, until recently, drank and bathed in the water

“I’m not a chemist, or a chemistry student,” she said. “I think that’s pretty bad.”

Water tests show radium levels of 52.01 picocuries per liter – that’s more than five times the acceptable standard. Psait is concerned about the lack of information from Mosaic officials. And she’s leery of what they do tell her, since the company wasn’t forthcoming, at first, when the sinkhole opened in late August.

“The thing I really don’t respect about them is that they knew that had happened, even when they had coordinated with the legislature and they didn’t report it to the public. They only reported it when it started getting leaked,” Psait said.

The Mosaic sinkhole dropped more than 215 million gallons of radioactive water into the Florida aquifer. The company has tested 763 nearby wells and say 10 show water that’s not safe to drink. But the company takes no responsibility for this, saying the radioactive materials are just a coincidence.

DEP officials say they are trying to contact all of the residents with wells that showed contaminated water and will assist those residents in determining how to fix their water issues. In the meantime, Mosaic continues to deliver drinking water to residents who request it.

The settlement agreement negotiated between the environmental plaintiffs (Sierra Club, Manasota-88, and People for Protecting Peace River) was approved by the District Court.

A copy of the court’s order is attached to this post.